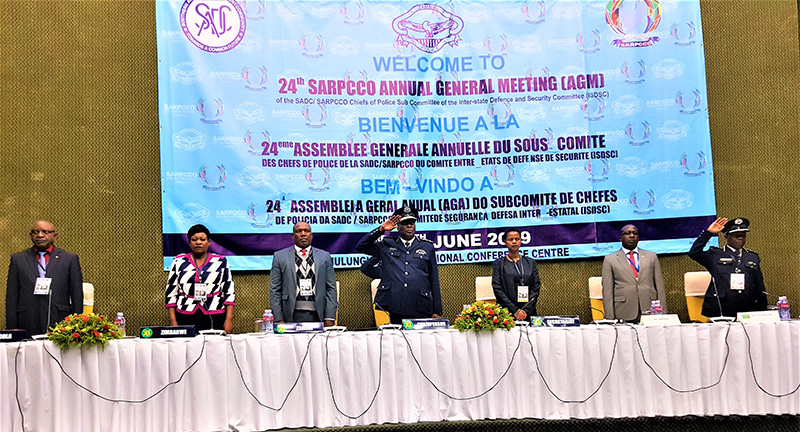 Criminal syndicates pervading justice and peace are counting their days of existence in the Southern Africa region as the Police Chiefs met at the 24th SARPCCO Annual General Meeting on the 6th day of June 2019 at Mulungushi International Conference Centre in Lusaka Zambia to discuss strategic policing issues. The meeting was officially opened by the Zambia Minister of Home Affairs, Honorable Steven Kampyongo (MP) who strongly emphasized the need for cooperation if at all the region is to contain cross border crimes.

Organized by the Southern African Development Community (SADC), the high level engagement emphasized the need to continuously provide conducive environs to allow all citizens to enjoy their socio-economic and democratic rights in their respective Member States. The SADC Secretariat represented by the Director of the Organ on Politics, Defense and Security Cooperation Mr. Jorge CARDOSO alluded to the need of preserving peace and tranquility through collaboration of Member States and cooperating partners.

The current SARPCCO Chairperson, Inspector General of the Zambia Police Service, IGP Kakoma KANGANJA strongly reiterated the need for cooperation and collaboration with relevant stakeholders and partners as the police cannot afford to work in isolation in the face of globalized world facing transnational organized crime by each passing day. The Chiefs of Police from Angola, Botswana, DRC, Eswatini, Lesotho, Malawi, Mauritius, Mozambique, Namibia, Seychelles, South Africa, Republic of Tanzania, Zambia and Zimbabwe participated in the meeting. Other local Law Enforcement Agencies such as the Immigration, Drug Enforcement Commission, the National Forensic Unit, Prisons and Correctional Service and the National Anti-Terrorism Unit were also in attendance.

Gracing the occasion was also the Secretary General of INTERPOL, Dr. Jürgen STOCK who met with the region’s Police Chiefs with a view to strengthen collaboration and cooperation between the two organizations. Echoing the same sentiments of unity and cooperation, the Head of INTERPOL Regional Bureau for Southern Africa, Mr. Mubita NAWA said, “Let us see through the same eyes, sing the same song, for we surely share the same future, the same destiny. No matter our countries of origin, no matter our differences in language and culture; through SARPCCO we belong to one, same, united family”. Among the issues discussed include Cybercrime which has threatened the entire region and beyond. To this end, the region has put in place mechanism to respond to the threats which include Capacity Building and Training activities.

Trafficking in Persons in the region was also part of the agenda item which was said to be affecting the region and required unified efforts to address it. Member States committed themselves to increase their efforts towards identification and arrest of traffickers across the region. The meeting noted with concern the impact of Intellectual Property Crimes in the region which include fake medicinal drugs and products causing health complications among unsuspecting members of the public. To this end, delegates agreed to increase capacity building and training programs among its rank and file to deal with the menace.

The meeting also recognized the strength of sporting disciplines to which delegates committed themselves fully to participate at the 10th Edition of the SARPCCO Games which Angola has already prepared to host. It is expected that the edifice would bring all SARPCCO Member States together showcasing their sporting talents and improving their networking. Delegates unanimously agreed to continue with the intensity of operations to curb transnational crimes, including firearm proliferation, motor vehicle crime, drug and human trafficking.

In a colorful and highly dignified symbolic event, the outgoing Chairperson, the Inspector General of the Zambia Police Service, IGP Kakoma KANGANJA handed over the SARPCCO Sword of Honour to the incoming Chairperson, the Commissioner General of the Zimbabwe Republic Police, CGP Godwin Tandabantu MATANGA. The two Police Chiefs shook hands firmly and hugged for a moment, strengthening each other as they work in unison towards preserving the ideals of SARPCCO.